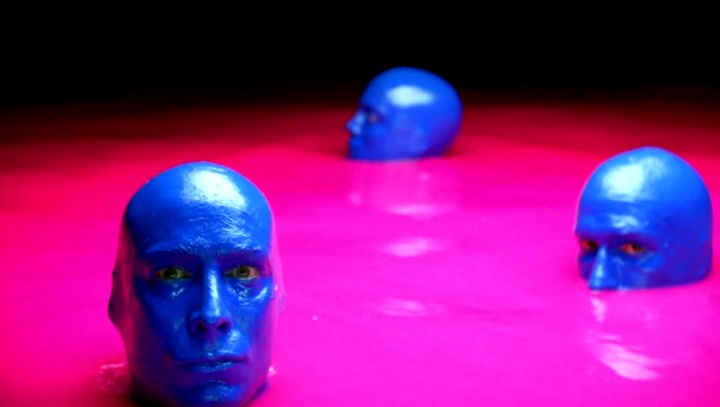 Becoming a Blue Man can take anywhere between 10 weeks and two years. Actors describe the process as surprisingly complex and being more about stripping away layers, rather than adding them.

You likely have many questions. We’ll try to answer a few.

Steps of an audition

We’ll ask you to do a series of nonverbal exercises that will allow us to get a sense of your storytelling ability – and hopefully a little glimpse of you. These exercises require no preparation.

They are not “Blue Man” specific. In fact, try to let go of anything you know about Blue Man Group for the audition.

The initial audition will last anywhere between 30-45 minutes

If we are interested in working with you further, we’ll ask you to return for a callback. 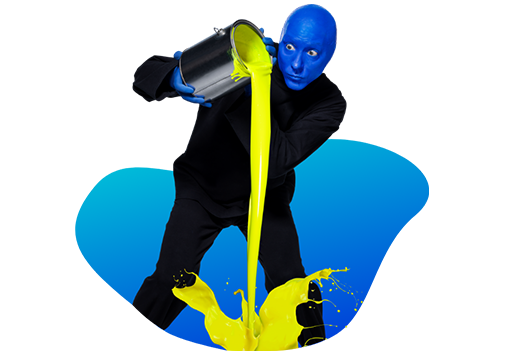 Step 2
The Callbacks - The Collective

In this three-hour session we continue to focus on nonverbal communication and clear physical storytelling in groups of three. We shift away from the individual and start to explore collective decision making. We often make cuts at the end of this session 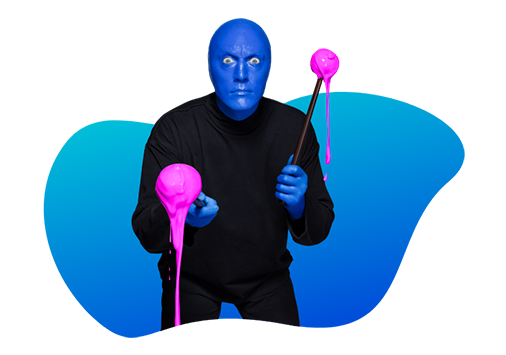 In this four-hour session we finally introduce the Blue Man character and specific pieces from the show. We often make cuts at the end of this session. 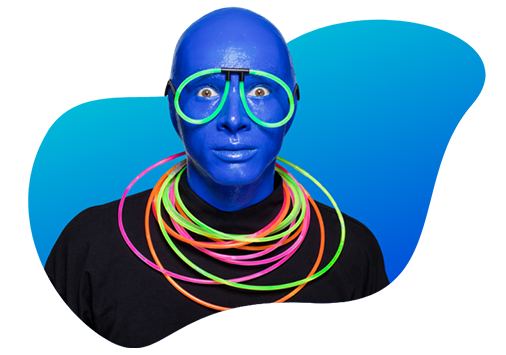 Step 4
The Callbacks - The Final Audition

This day-long session begins with a brief drum audition*, followed by a review of sessions 1 and 2, culminating in a final audition for the casting and training team in full makeup and costume.

*Most performers we audition are not drummers. This is just a check for music potential. 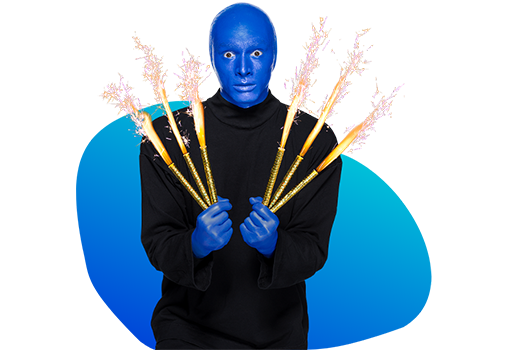 It takes a very specific combination of characteristics to be invited to a Blue Man training class. Depending on your drumming ability and our staffing needs, training can begin anywhere from 1 month to 2 years following callbacks.

Training lasts 8 weeks, and is ultimately a paid extension of the audition process in that you can be cut at any time.

Pete is a Blue Man Trainer and Blue Man in New York. He has also been a cast member in Amsterdam.

In playing or training the character, I think it helps to embrace some of its paradoxes.  The character arrives, w/ his cohorts, on a very clear, urgent mission; one that would seem to require a unity (and foreknowledge) of their strategies, methods, equipment, etc...  Yet it’s early in the mission they find they have nor very easily receive any of this (and are, in fact, at times stripped down to being unified by little other than the mission’s urgency).  In spite of this, they still move into each moment taking fragile-to-fanatical leaps of faith that whatever seemingly crazy action they take, they’ll somehow get back on track w/ the mission; and by show’s end, that faith sort of magically pays off.  I think it’s that oscillation between heroic knowing, innocent bewilderment and shamanic faith that gives the character a lot of its mystique.  When a performer can toggle between those states (especially if anchored in a mature self-knowing), it can make for a really remarkable Blue Man.

Portraying a character as your profession is a unique responsibility. Sometimes when I’m getting ready to perform, I think about a family that might be on their way to see the show at that very moment and the conversation they may be having, sharing their excitement and anticipation with each other. Before I put the makeup on, I’m irrelevant to them. From the stage, I become an active participant in their lives, at least for this fleeting moment. It reminds me that in anything we do, interaction with one another in some form is at its core, driving us.  In the context of the blue man show, that interaction becomes hyper-focused; it can be very intense.  We go into the audience and look directly into a person’s eyes; where it goes from there is up to the both of us, then and there.  I studied drumming, not acting. Regardless of my or anyone else’s path though, it’s that moment of connection that we’re striving for.  Whatever level of craft we bring to the show is simply a means to make the connection that much more immediate.

Gideon is a Blue Man in Boston and New York.

Seeing shows by artists such as Richard Foreman and the Wooster Group helped me to understand the ethos in which Blue Man was created.  And I’ve always had a great love for slapstick comedy: the Three Stooges, the Marx Brothers and Buster Keaton.

Jordan is currently a Blue Man.

The continuous practice of breaking beats down into smaller, more detailed beats and dissecting moments into smaller and more intricate moments and thought processes are borrowed from Grotowski and the art of imagined circumstances and drawing impulses from your partner come from Meisner. Lecoq helps to be aware of one’s physicality and draw character from that, similar to mask work which is heavily reliant on breathing and body posture to convey story.

Director of Casting and Training

Director of Casting and Training

Tim is the Director of Casting and Training for Blue Man Productions.

The bulk of my training, study and experience focused on text based theatre.  So the idea of directing and developing non-verbal performers was initially a bit perplexing.  Then I realized that everything is transferable.  Everything applies.  You still have an objective in every moment, you have a greater goal.  There are obstacles.  These things exist in theatre, in drama, regardless of whether you speak or not.  The way in is to completely launch yourself into the given circumstances of the character and, ultimately, the environment in which you find yourself.  These are the keys to finding your Blue Man.  You have to believe in the Blue Man’s mission and the necessity of this mission to connect the people who are your audience that night.  I love the immediacy of the event –this is the thing that still makes watching the performance compelling for me every time.  Seeing a new performer “get” it is super satisfying.

Tascha is the Asst. Director of Casting and Training for Blue Man Productions.

Casting and Training Blue Men is always a bit of an exploratory adventure.  While there are, of course, certain base skills and physical requirements we look for, what I look forward to is discovering the wonderful oddities that make each person distinctly who they are.  Every Blue Man is based on the person performing; therefore we learn a lot about every person who works their way through auditions and the eight week training process.  The real payoff is that we get to see these qualities emerge over the course of this time on stage.  For me, the show itself is about human connection – or more specifically – our efforts at connection.  The Blue Man is a sort of primal investigator in this arena – demonstrating by his own efforts, just how much we all need one another.  It’s encouraging to be reminded that we can each be so remarkably unique and yet so wholly a part of the same human mission.

Randall is the Director of Performer Development, a Blue Man Trainer and a Blue Man.  He has been a member of casts in New York and Boston.

It’s not acting when a child leaves cookies out for Santa. They’re not concerned with how they look doing it, they’re just focused on getting it right, for real, leaving the perfect amount of cookies and milk so Santa will show up.  Do it wrong, no Christmas. Do it right and you help make the magic happen. That’s investment you can’t fake, or act, whatever you want to call it.

Callum has been a Blue Man in London, Tokyo, Berlin, Australia and Norwegian Cruise Lines

The ability to still act like a complete child in all the best ways helped prepare me.

Steve is an Associate Music Director for Blue Man Productions.  He has also been the Resident Music Director and Kit player in Boston as well as a band member in Amsterdam and Tokyo.

I had never auditioned for anything like Blue Man before and I feel in retrospect the best decision that I made going into my audition was to expect the unexpected. I tried to keep an open mind and open ears. Lucky for me that mindset has served me well. Since joining Blue Man in 2005 (on kit/percussion), I have been challenged like never before, worked with extremely talented people functioning at the highest level, travelled the world and have been welcomed into a creative community second to none!