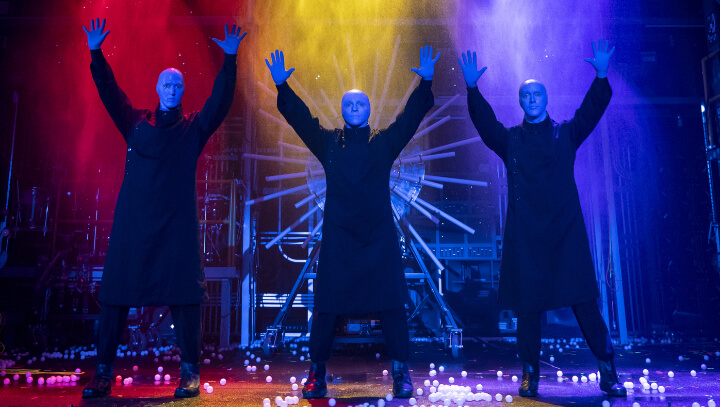 More than 50 million people around the world have experienced the smash hit phenomenon that is BLUE MAN GROUP and now it’s your turn! BLUE MAN GROUP’S new North American Tour is coming to a city near you for a limited engagement.

It’s everything you know and love about BLUE MAN GROUP—signature drumming, colorful moments of creativity and quirky comedy—the men are still blue but the rest is all new! Featuring pulsing, original music, custom-made instruments, surprise audience interaction and hilarious absurdity, join the Blue Men in a joyful experience that unites audiences of all ages.

Catch us on tour

It looks like there is no show near you

Sign up to our newsletter and stay tuned for when we come closer to you!
Get Notified Get Notified

It looks like there is no show near you

Sign up to our newsletter and we'll let you know when we're coming near you!
Get Notified Get Notified

Great shows all year round!

What are the measures taken by Blue Man Group to respond to COVID-19 pandemic?

Taking into consideration the World Health Organization (WHO) and the Center for Disease Control (CDC) recommendation for social distancing as well as the escalation of the Coronavirus (COVID-19) pandemic, following postponements of numerous shows in recent days, select tour venues may be closed or dates suspended. Please check your local venue websites and contact your point of purchase for specific news and updates.

From the very beginning of the outbreak of the new coronavirus, Blue Man Group took rigorous measures to protect its work teams and the public. Our priority has always been and remains the health and safety of our artists, our partners and various employees, but also of our public.

What is Blue Man Group all about?

How long is a Blue Man Group performance?

The show runs approximately 90 to 105 minutes with no intermission.

What is the poncho section and will I get wet sitting there?

During the Blue Man Group performance, materials sometimes splatter off of the stage. We call this “The poncho section,” because we provide disposable plastic ponchos for audience members to wear if they prefer. You will not get “wet,” but you may be splashed with materials. All materials are washable, but we suggest you wear your poncho and comfortable washable clothing that does not need dry cleaning.

What language is Blue Man Group performed in?

What happens if we are running late?

Late patrons are seated at the discretion of the management at a time when seating will not interrupt the show.

The schedule varies by city and season, but Blue Man Group performs most days and weeks of the year. Please check the calendars for each city to find tickets, dates and times that work best for you.

How do I become a Blue Man or play in the band?

Our Casting team holds regular auditions. Visit our Casting page to learn all about the process and submit yourself for consideration.

How far in advance can I purchase Blue Man Group tickets?

Blue Man Group tickets are generally on sale 3 – 6 months in advance. Please check the calendars for each city to find tickets, dates and times that work best for you.

Please check with the individual cities.